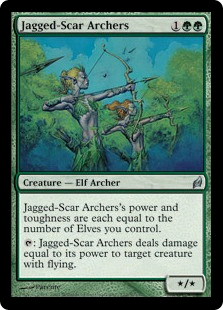 Creatures fight for you. They’re permanents, but unlike any other kind of permanent, creatures can attack and block. Each creature has power and toughness. Its power (the first number) is how much damage it deals in combat. Its toughness (the second number) is how much damage must be dealt to it in a single turn to destroy it. Creatures attack and block during the combat phase.

Unlike other types of permanents, creatures enter the battlefield with “summoning sickness”: a creature can’t attack, or use an ability that has

Jagged-Scar Archers's power and toughness are each equal to the number of Elves you control.

: Jagged-Scar Archers deals damage equal to its power to target creature with flying.

This information may be copyrighted. So it will be used in a way that qualifies as Fair Use under US Copyright Law. The information on this wikia was found on: http://www.wizards.com/Magic/Digital/Default.aspx or came from Magic the Gathering: Duels of the Planeswalkers: (Xbox 360 and PC Version's) The Information was gathered from Magic 2011. This information may be owned by Multiverse: Magic the Gathering, which is owned by Wizards of the Coast. The use of this information in www.duelsoftheplaneswalkers.wikia.com articles can be considered fair use because: It illustrates the topic of our articles, and no equivalent free and accurate information is available. The use of this information on articles other than those outlined above with legitimate fair use rationales may be a copyright violation.

Community content is available under CC-BY-SA unless otherwise noted.
Advertisement